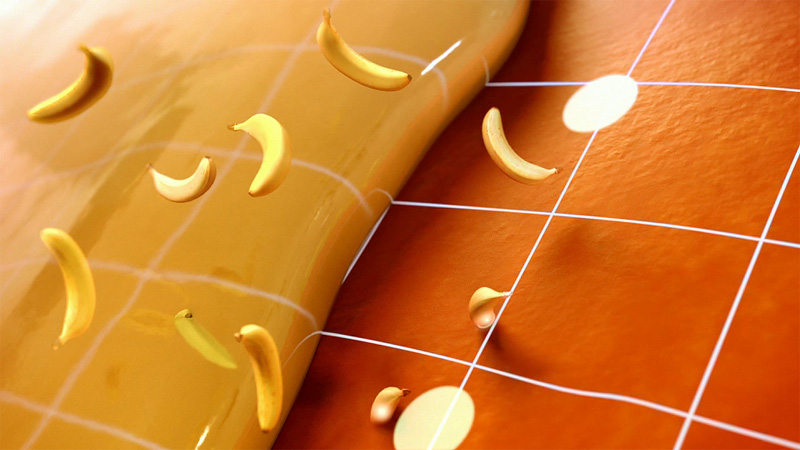 Last night was the second night this week that I haven’t fallen asleep until 1am. The first night I was in bed before 9pm, and managed to complete two crossword puzzles, compose a poem, and make two snack trips to the kitchen before sleep came. Last night I was snug as a bug, perfectly cozy, and just wouldn’t nod off.

But for whatever reason, after I send my husband off to work in the morning…I can go back to sleep for hours. So today I did, and as per the usual, it resulted in some majorly weird dreams.

This particular one was multi-faceted. One of those dream-within-a-dream things. Anyway, all I know is that at some point someone made me mad and I started throwing bananas at their head during some church-like service. Lots of bananas. Some peeled, some very un-peeled. I think there was some purple, squishy fruit involved near the end, too. But lots of bananas.

This being a dream-within-a-dream, I “woke up” in it and felt incredibly guilty. No one deserves to have bananas launched at their head, in public or private. I remember contemplating how I was to apologize, but then I began to think it was really a dream…and did I need to apologize to someone for something I didn’t “actually” do? It was quite the quandary, but eventually the dream shifted into something about buying ice cream and forgetting my wallet.

Well, eventually I woke up and decided to rummage through the kitchen for something to eat. As I stood there waiting for my bagel to toast, I found myself thinking about all the ways God has blessed us in the past year and a half. We have a baby arriving near the end of the month, a house purchase which should be finalized within a few weeks, and so many wonderful treasures of friends and family. However, anyone can have “stuff” and relationships. What makes any of it worthwhile, though, is the realization that as one surrendered to Christ, your life is guided and directed by Him, and there is no fear of the future. You can enjoy the present, with all its ups and downs, because you know Who is in control of the course.

On top of that, I realized how incredible it is that nothing we can do is so horrible that God would refuse to forgive us if we repented. We don’t even have to fear ourselves. The Bible is full of ordinary people who made some extraordinarily bad decisions, and God still called them back into relationship.

So don’t think too highly of your ability to sin. God can still forgive you.